Who was Noah? What was Noahs ark? And, what does this all have to do with the History of Jesus Christ? I doubt you've heard the story of Noah told this way!

2) What does God desire that we do because of our sin?

Thanks for joining me to discuss one of my favorite Bible stories - Noahs Ark. I heard Hollywood is making a major motion picture about Noahs ark, so I'm thrilled, and can't wait to see it. In the meantime, let's talk about some of the more interesting things God wants us to know about Noah and the biblical flood. Grab a glass of sweet tea and let's get started.

Do you know what "typology" is? It's when a sign, or symbol, or "type" of something in particular, is sent ahead of what it represents. It prepares the way, or people's minds, for the coming real event. It's a very powerful form of prophecy. 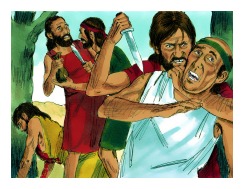 Let's back up a minute. Let's review what led up to the need for Noahs ark. We've already discussed man's original sin in the Garden of Eden, and some of the consequences it had upon mankind. In summary, original sin made us humans all sinners from our own conception (Psalm 51:5).

We are born sinners, therefore we sin. Sin is part of our nature - it's part of the fabric that makes our heart and soul. Because of our sin nature, we oppose God from the womb (Ephesians 2:1-3). We have to accept this sad fact, admitting that we're natural born sinners and totally in need of a sinless Savior.

People's sin got so bad in the 1,600+ years following the Garden of Eden, that God had had enough. Genesis 6:5 states, "The Lord saw that the wickedness of man was great in the earth, and that every intent of the thoughts of his heart was only evil continually."

"And the Lord was sorry that he had made man on the earth, and he was grieved in his heart. So the Lord said, 'I will destroy man whom I have created from the face of the earth, both man and beast, creeping thing and birds of the air, for I am sorry that I have made them'" (Genesis 6:6-7). 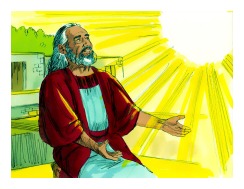 Sin hurts God's heart, and the sheer magnitude of it led him to pronounce a severe judgment on the entire earth. The judgment is known as Noah's flood. Noahs ark, though, was the provision (aka grace) for humanity to continue.

You and I have to fully understand God's message and meaning of the biblical flood and Noahs ark. Meaning that our own sin is just like the sins that man did in Noah's time. Your sins, my sins, and the sins of all people deeply hurt our Holy God - that fact will never change. We deserve to be swept away like the millions of people God punished with Noah's flood. God struck the earth because of sin, using them as an example to us, so we realize how serious sin is to God.

Noah was a righteous man who drew God's attention (Genesis 6:8-9). Although man no longer pleased God because they were totally selfish, proud, and sinful, Noah had a spark in his spirit that God appreciated. 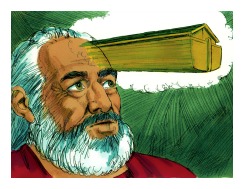 God found a man who was living with a godly attitude. Noah loved the Lord, and lived properly. He was able and willing to serve God, and because of his high character, Noah got to experience God. Take note, because you can do the same!

In God's work of ridding the earth of despicable sin and wickedness, he invited Noah to join him. The Lord told Noah to build a vessel that would house him and seven of his family members, animals for food, and animals to repopulate the earth after the global flood. God gave Noah the detailed instructions with which to build the ark.

We can learn greatly from Noah's commitment to God. Noah chose to please God when decisions had to be made. Therefore, when God was working and needed a person to assist him, he looked and found Noah. Noah's great faith drew God's attention. Our lives should focus on pleasing God, too, so we are ready to serve him when he is at work. 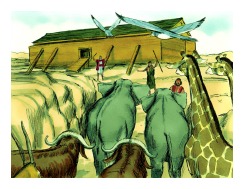 Repentance means to change your mind and turn from sin. God gave mankind 120 years for which to repent of their evil ways. We know that because that's how long it took to build Noahs ark. No one, other than Noah's family, believed that God was going to send a flood to cover the entire earth.

God was using Noah to build this massive ark because of the approaching flood - God was warning the people with visible evidence what was coming! If one person, ONE PERSON, would have repented God would have allowed him or her to board Noahs ark.

It's sad, because people TODAY still refuse to believe the great worldwide flood occurred. There is amazing scientific evidence to prove that the biblical flood did in fact cover the earth. Noah's flood was real and the Bible records the fact, "And all flesh died that moved on the earth: birds and cattle and beasts and every creeping thing that creeps on the earth; and every man. All in whose nostrils was the breath of the spirit of life, all that was on the dry land, died" (Genesis 7:21-22). 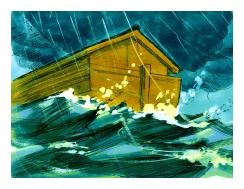 You and I and all people everywhere need to understand the meaning of Noah, the flood, and Noahs ark: Sin leads to a hellish judgment (the flood), but repentance leads us to our Savior (the ark).

Listen to this astounding fact: Before this mighty flood it had never rained on the earth (Hebrews 11:7). The earth had been a global terrarium up to this point. There was a deep layer of water completely surrounding the earth's atmosphere. This phenomenon kept the entire earth at a constant tropical temperature, and protected the earth from damaging sun-rays. The plants were watered from the mist rising up out of the ground. There were no storms before the flood, which is one reason why people thought Noah was crazy for building an ark! Amazing, huh?!

The day of judgment came and God opened the earth's floodgates. The waters that surrounded the earth poured down for 40 days. The waters stored in the ground rose up to cover the earth, as well (Genesis 7:11). All men, beasts and birds were killed except those on Noahs ark (Genesis 7:23). God's terrible wrath drowned the extreme human wickedness.

Noahs ark eventually came to rest on Mt Ararat sometime after 150 days (Genesis 7:24), and the family and animals exited Noahs ark (Genesis 8:16). God commanded them to reproduce and fill the earth (Genesis 8:17). Noah built an altar to God and sacrificed an offering to God which pleased him. God's terrible wrath had subsided - the punishment was complete. 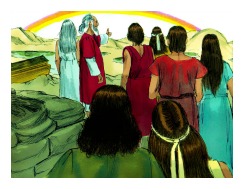 God then promised that he would never again send a flood to destroy all of mankind. He said the rainbow in the clouds would be the sign of his covenant (Genesis 9:8-17). We should think of Noahs ark and God's promises every time we see a rainbow in the sky.

In the Bible, Noah is shown to be a righteous man (Genesis 7:1). He and his family were saved from the great flood because of his faith in God. You and I would be wise to follow Noah's example. The meaning of Noahs Ark and the great flood, then, is to reveal God's hatred of sin. Sin will be punished by God, so the less we sin the less we'll be punished - it's a pretty simple concept. 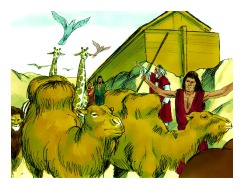 The only way to be saved from the approaching judgment is by heeding God's warning. Like Noah and his family, you have to listen and accept his means of salvation. Our Noahs ark is the cross of Jesus Christ. And the only way to grab hold of it is through repentance and faith in our Savior.

God used Noah to help him in his work. We should desire the same for our own lives. When we obey God, he will notice, and reward us by letting us join him in his work (John 15:5-6). Without your obedience to his commandments, all of your works for him will be nothing but useless rags (Isaiah 64:6). You and I need to start with repentance and turn from sin to God. Let's heed the lessons found in the very real and very true story of Noahs ark.

3) How does God reward us for obedience for righteous living?

It was by faith that Noah built a large ark to save his family from the flood. He obeyed God, who warned him about things that had never happened before. By his faith Noah condemned the rest of the world, and he received the righteousness that comes by faith. Hebrews 11:7

So [Jesus] went and preached to the spirits in prison — those who disobeyed God long ago when God waited patiently while Noah was building his boat. Only eight people were saved from drowning in that terrible flood. And that water is a picture of baptism, which now saves you, not by removing dirt from your body, but as a response to God from a clean conscience. It is effective because of the resurrection of Jesus Christ. 1 Peter 3:19-21

God makes it clear that Noah was a man who believed in God as Creator, Sovereign, and the only Savior from sin. He found grace for himself, because he humbled himself and sought it. John MacArthur Jr.

God's covenant with Noah brought provision and protection in the midst of severe punishment. The remnant was preserved and God initiated steps toward reestablishing the created order on earth. John MacArthur Jr.

Dear Lord, I'm a sad excuse for your child if I can't learn from these amazing things you share with me from the past. Help me to fully grasp the truths found in the history of the flood and change my life accordingly. In Jesus' name. Amen

Special Note: I'm grateful to Big Book Media & Free Bible Images for use of their illustrations for Noahs Ark.