Jesus Christ's two sons parable has a very strong message, which is the fact that worthless words reveal empty hearts. Let's understand how to stay out of God's wrath upon hypocrites.

Previous Lesson: Parable Of The Sower #4.06.

1. On the heels of what radical event was this parable spoken by Jesus?
2. Where did the authority of John the Baptist and Jesus originate?
3. Who did the first (e.g. older) son represent in this parable?

Please don't be embarrassed if you thought this parable was the Parable of the Prodigal Son - many people get the names of the two parables confused. Click on the link if you'd rather join that Bible study lesson.

The parable of the two sons is a wonderful and powerful lesson in it's own right. Let's find out why.

Jesus' two sons parable was spoken on the Tuesday of Passion week, i.e. the Tuesday between his triumphal entry on Palm Sunday and his crucifixion on Friday. The previous day found Jesus running out the moneychangers from the temple.

Jesus was claiming his kingship and informing the masses who he was - the Messiah and King of Israel. His day had come and no longer were any secrets necessary. Jesus was calling out the religious hypocrites and giving sinners hope for eternal life. He was the stumbling block for many, but a spotless sacrificial lamb for others. 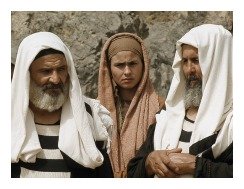 The two sons parable was spoken in response to the Pharisees' attack on Christ's authority.

They wanted to know who or what gave him the authority to purge and teach in the Jerusalem temple. Jesus had an edge, he was on mission, and hyper-focused on his final messages before his crucifixion.

Jesus brilliantly asked the religious elders and Pharisees a question before responding with his own answer.

Jesus asked, "Where did John the Baptist receive his authority, from heaven or men?"

The Pharisees were trapped, and they knew it. If they responded, "From heaven" they would be admitting that John was right and they were wrong, which would ultimately reach the conclusion that Jesus was their Messiah. If they responded, "From men" then the masses of people would attack them because he was loved as a prophet by all the people. To reject one of God's true prophets was to reject God.

The Pharisees had no way out, so they meekly responded, "We don't know." Jesus won that debate, because the answer to the religious leaders' initial question became rhetorical. The answer was the same as that for John the Baptist's authority, Jesus' authority came from heaven.

With this diatribe, Jesus also exposed the Pharisees' total lack of authority in demanding Jesus' authority. 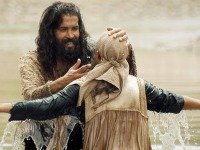 The two sons parable was then spoken by Jesus, and it was about the Pharisees' attitude towards both John the Baptist and the Messiah.

Jesus gives us the direct explanation and applications in verses 31b-32, so we won't spend much time allegorizing or pre-explaining the representations involved.

Jesus asked the question of the Pharisees, "Which of the two sons obeyed?" They responded by saying the first son, which was obviously the only answer.

The two sons parable, at this point, gets turned on the Pharisees. Jesus retorts, "Truly, truly, I say to you, corrupt tax collectors and prostitutes will enter the Kingdom of God before you."

Wow! Jesus holds nothing back in his condemnation of these religious hypocrites.

Tax collectors were basically legal thieves who took all the money they could get their hands on from the Jewish residents of Jerusalem. They used trickery and bullying techniques to strike fear in the residents. They were despised by the general populace, and especially by the Pharisees, as were the lowly prostitutes.

The older son in the two sons parable represented the tax collectors and prostitutes. You see, the tax collectors and prostitutes didn't initially agree with Moses and the prophets, however, when they heard John the Baptist preach they believed and repented. They were the older son of the two sons parable. They didn't believe, but then repented and demonstrated their belief and loyalty to God.

The younger son, on the other hand, represented the Pharisees and Scribes.

They first "agreed" with the Law and Prophets, but when John the Baptist arrived they did not accept him. Quite the opposite, in fact.

Jesus stated, "John the Baptist came and showed how you should live, but you failed to believe him. Tax collectors and prostitutes did believe him." Jesus bluntly stated this fact so the Pharisees would know why they weren't allowed into heaven. John the Baptist's message about the baptism of repentance was the key to understanding the coming Messiah, and the Pharisees rejected the message.

Further, the religious hypocrites should have noticed the worst sinners turning from their sins and believing God. Miracle conversions were happening in front of the Pharisees' faces, but they were too blind to see.

Jesus said, "You saw this happening, but refused to believe him and repent of your sins." Because they rejected John the Baptist, they likewise rejected the Messiah, and ultimately the Father who sent him.

Hypocrites are actors, and actors have no foundation. They didn't know the Scriptures, while John and Jesus knew the Scriptures well. Because of that fact, Jesus exposed them as fools.

Please learn from Jesus, and learn the meaning of this lesson from the two sons parable.

The two sons parable has a main lesson. A person's words don't always truly reflect their heart condition. A person's actions are more indicative of what is in the heart.

James the brother of Jesus says it beautifully, "So, get rid of all the filth and evil in your lives, and humbly accept the word God has planted in your hearts, for it has the power to save your souls. But don't just listen to God's word. You must do what it says. Otherwise, you are only fooling yourselves." (James 1:21-22).

We must all be the older son from the two sons parable. We're all sinners in need of repentance. We must turn from our wayward misdirection.

The life of selfishness and sin only ends in eternal grief and horror. Instead of talking about our religion let's live it. Let's act on it. We're not fooling God - he's keeping track.

James, again, tells us, "What good is it, my brothers, if someone says he has faith but does not have works? Can that faith save him?" (James 2:14 ESV).

The answer doesn't need to be spoken, but for the record, it is, "No. Worthless words reveal an empty heart."

The two sons parable gives us a pattern in which to observe and respond. First, there was the Law and Prophets, which the sinners didn't abide by, but the religious leaders did. The system was only a harbinger of things to come. It wasn't God's final plan. The Messiah was the final plan. 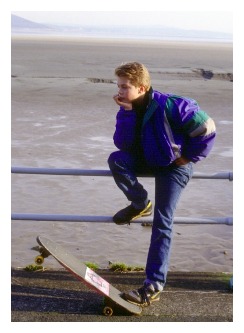 And when it was time for the plan to begin, God sent John the Baptist to clear the road for the Messiah.

John was sent to preach repentance and faith in God. The sinners listened and acted upon the message, while the religious leaders loved their "religion" too much to do so. They rejected John, and subsequently rejected the Messiah.

The two sons parable, taught by Jesus Christ, demands that you LET GO of whatever religion you trust, and cling to him alone (Luke 17:33).

What was your original religion? In what did you believe and trust?

Did your parents raise you in some unbiblical church? Were you taught some strange religion you just never really believed? Maybe your parents were atheists, blind to the Bible?

Did you learn the Hebrew Scriptures with all the passages about the coming Messiah removed?

Well, Jesus sent John the Baptist to prepare your heart. John said, "Repent of your sins and turn to God, for the Kingdom of heaven is near!" (Matthew 3:2).

Listen to John, because Jesus wants to enter your heart (Revelation 3:20), so prepare the way (Matthew 3:3).

Next Lesson: The Parable Of The Talents #4.08

1. Who did the second son represent in the parable of the two sons?

2. The two sons parable exposes those who trust in the wrong thing, whether themselves, or a false religion. What is the only sure thing that we can trust in to train us in the truth of Jesus Christ?

3. The dangers of boasting are also in view here, since that is what the Pharisees were good at doing. Do you believe it is okay to tell others about the good deeds we do? Won't sharing those things inspire others? Or, is it nothing but veiled bragging?

Prayers Of Thanksgiving:
Dear God, the two sons parable exposes those who only talk about being Christian, but don't act upon it. The religion of those people is worthless. Please help us see the error in our fake profession. If we can't serve you, then we have no business talking about you. If we can't help others, then our worship is useless. Lord, have mercy on us. Help us to hear AND obey your commands. Thank you for your wonderful patience with us and your deep love for us. In Jesus' name, Amen.

Return to Parables Of Jesus page. Return to GraspingGod.com's Homepage.