The meaning of Palm Sunday can be discovered in a thorough study of Jesus' triumphal entry into Jerusalem. Join us to find out if you'll be reigning beside King Jesus someday soon.

The meaning of Palm Sunday is found in the story of Jesus' triumphal entry into Jerusalem.

The triumphal entry of Jesus is recorded in all four gospels, which is a rarity, thusly speaking to the grand importance of this glorious event. 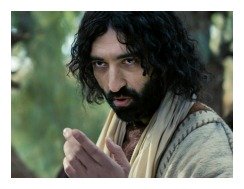 Jesus' time was at hand (John 2:4). The new King of Israel was revealing himself in Jerusalem. How exciting!

The prophets had foretold it, "Rejoice, O people of Zion! Shout in triumph, O people of Jerusalem! Look, your king is coming to you. He is righteous and victorious, yet he is humble, riding on a donkey -- riding on a donkey's colt." (Zechariah 9:9). Jesus also predicted his entrance to Jerusalem (Matthew 16:21). The time was now!

You're going to love this Bible study. Let's dig in and learn the meaning of Palm Sunday.

Jesus Christ had been at the house of Lazarus, Martha and Mary in the town of Bethany. Mary anointed Jesus with expensive oils, thinking it was simply a sign of her devotion. She was actually and unknowingly preparing him for his death and burial in Jerusalem (John 12:7).

The irony, of course, is that his death and burial would introduce his eternal Kingship over God's Kingdom. 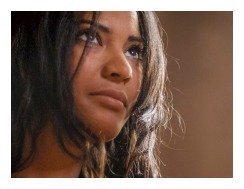 Wow! This heart-wrenching story will unfold in a few mind-numbing, gut-wrenching days.

Jesus and the twelve disciples were walking towards Jerusalem and they stopped in the town of Bethphage.

Jesus told two of the disciples to walk ahead to Jerusalem and find the donkey's colt awaiting his arrival.

Jesus' disciples brought the colt and it's mother back to Jesus, setting their robes upon it. Jesus mounted the colt and the entourage made their way towards Jerusalem.

Along the way, Jesus' followers and onlookers were singing his praises (Luke 19:37).

Are you beginning to see the signs of the meaning of Palm Sunday yet? Let's keep moving. 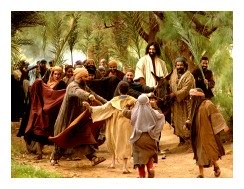 Several of the Pharisees heard about the commotion, moving quickly from Jerusalem to investigate. They saw Jesus riding the colt and a throng of people singing, "Blessings on the King who comes in the name of the LORD! Peace in heaven, and glory in highest heaven!” (Psalm 118:26).

The Pharisees were outraged! They attempted to stop the blasphemy of the crowd. They wanted this false prophet, Jesus of Nazareth, DEAD.

The Sanhedrin members weren't plotting to kill Jesus during the Passover celebration, because they were hoping to wait til it passed.

Jesus, though, triumphantly riding into Jerusalem, forced them to react. He boldly told the religious people that if the people were quiet the stones would proclaim him as King of the Jews!

The Pharisees became incensed. The Sanhedrin's murderous plot began to quicken and thicken. Can you sense that the meaning of Palm Sunday isn't all rosy? 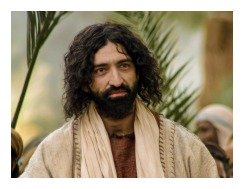 In the midst of the pomp and excitement, Jesus stopped a moment because the sight of Jerusalem broke his heart (Luke 19:41-44). He foresaw the future of Jerusalem and the coming destruction of the temple.

For a moment, the cheering and singing faded into the background, while Jesus could only hear the future wailing of his people and see the distant destruction and bloodshed.

He also knew the tremendously sad fact that some who worshiped him today, would call for his crucifixion in a few short days. It's heartbreaking to think how Jesus must have felt. 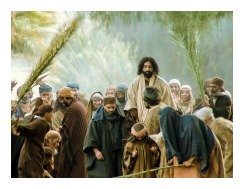 The adoring people were praising him, laying down their clothes for him. The Jews, by tradition, waved date palm branches at their king, laying them down in his pathway.

Now you know the meaning of Palm Sunday's name!

The Jews knew they finally had their King! Jesus was their Abraham, Moses, Elijah, and David - all in one!

He would be the new glorious King of Israel, their promised Messiah! They heard about Jesus' miracles, Jesus' teachings and all the greatness of Jesus' life. Now he rides into town on a colt!

They were calling him Jesus, the prophet from Nazareth in Galilee. He would lead them out of bondage to the Romans and rule over their beloved nation of Israel!

Unfortunately, the Jews didn't understand the true meaning of Palm Sunday. Palm Sunday was to reveal the Kingship of Jesus, true, but it wasn't an earthly rule.

Jesus made himself a King, alright, but he was the King of the Kingdom of God. It's a heavenly kingdom that reigns over all the universe. It's a spiritual kingdom without boundaries, without conquering armies and without end. God would rebuild national Israel in the distant future, but not now.

The Real Meaning Of Palm Sunday 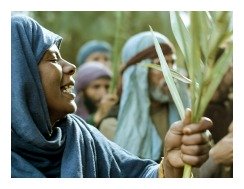 Jesus rode into Jerusalem on a donkey colt, signifying his gentle humility.

His kingdom was meant to be ruled by peace. Had he mounted a strong white stallion he would have signaled a fight for an earthly kingdom.

Jesus' royal court members weren't clothed in dazzling gems and shiny robes, but nearly naked and wearing sandals. They were fishermen, prostitutes, and tax collectors - NOT princes and soldiers.

The real meaning of Palm Sunday, then, is that Jesus Christ is King of the peaceful, spiritual, heavenly Kingdom of God.

Pontius Pilate knew he had nothing to fear with this man - there would be no threat to Rome from Jesus Christ.

The Sanhedrin (aka the Pharisees and Sadducees), on the other hand, had serious concerns (John 11:45-53). They incorrectly feared Jesus would bring the Roman's wrath upon Jerusalem. They were also envious of Jesus' adulation, thusly hating this so-called "King of the Jews." They were so enraged by this triumphant procession that they ground their jaws, clinched their fists and spit the vitriol that boiled within them. Mercy. 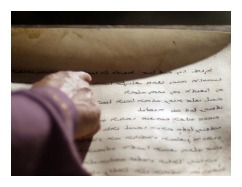 Had the religious leaders (aka hypocrites) known the Hebrew Scriptures, they would have known that Jesus was their true Messiah, the Son of God (Matthew 22:29).

However, people putting their religion before God become idolators blinded to the Bible. Personal sin blinds people to God's reality and truth.

The religious leaders loved the glamor of their positions more than they loved God. Therefore, they feared that Jesus threatened their job security. They valued the successful business model they created at the Temple. The last thing on their minds was God's Son, their Messiah. They were spiritually blind to the Savior of the world (2 Corinthians 4:4).

Meaning Of Palm Sunday Hidden To Some People 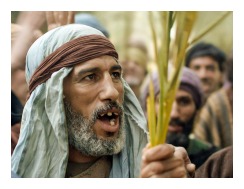 Jesus made a tremendous statement on this day: the meaning of Palm Sunday is that Jesus Christ is the Chosen One of God - the King of kings. Jesus is the sovereign ruler over all the Universe!

The worshipers didn't know the extent of it, the Sanhedrin didn't believe it, and the Romans didn't really care.

But, for the biblical record that was to come, for our benefit, take note that Jesus Christ accepted the Kingship of heaven on Palm Sunday. History reveals this day was his true triumphal entry into Jerusalem, his city and our future, eternal home (Revelation 21:2).

Palm Sunday history also reveals that in a few days the wickedness of the common people would be unencumbered by the Spirit (2 Thessalonians 2:7). Their evil hearts had free reign (Jeremiah 17:9). 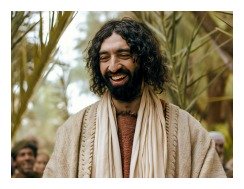 The result would be Jesus on the cross, hanging high over Calvary.

The reigning King of the Kingdom of God would be utterly rejected by mankind. The King would be tortured beyond recognition and finally murdered.

Today's adoring crowds, who waved date palm branches at their long-awaited King, being displaced by a sinful mob thrusting their fists in hate. "Crucify him!" (Matthew 27:23b).

It should sadden all of us who love Jesus, knowing and understanding how he suffered during this week of his life.

Now you know what happened on Palm Sunday. Jesus entered Jerusalem riding a colt donkey, coming in the name of a peaceful, sovereign God.

Finally, even God the Father would forsake his Son five days hence. Jesus rode into Jerusalem peacefully on a colt. 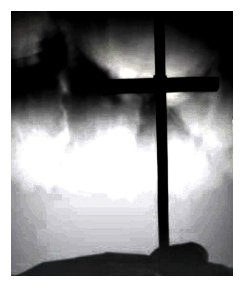 The town would literally turn into his personal, earthly hell within days.

Jesus, with you and me in mind, rode through human praises on a donkey. He accepted the anointing of Kingship over God's eternal, heavenly Kingdom. He withstood the most grueling of human torture.

Love for his Father and for you and me, drove him to the cross (John 3:16). He rose from death - first to earth, and then to heaven.

He reigns from his throne now - waiting for you and me to join him. This amazing King will also anoint each of us, so we can reign with him over the Kingdom (2 Timothy 2:12a; Revelation 20:6).

What is the ultimate meaning of Palm Sunday? From God's perspective, Palm Sunday was the necessary anointing of Jesus Christ to his rightful throne. The Kingdom of God was awaiting its Ruler. Jesus Christ the King would finally come and rule from the right hand of God. Praise Him, our King!

1) The meaning of Palm Sunday is simply this: Jesus Christ is the King of a heavenly Kingdom built on love and peace. With that fact in mind - How do you evaluate the religious wars that have transpired over the centuries?

2) Jesus and the apostles had little money and no valuables - they lived "on mission." Is discipleship different today? Why or why not? If so, is it right or wrong in its differences?

Faith Quotes!
It is Jesus, the Son of David, the King of the Jews...He wears no crown except the crown of thorns, yet he is more royal than you. About his loins he wears no purple, yet he is more imperial far than you. Upon his feet there are no silver sandals bedight with pearls, yet he is more glorious than you. Room for him: room for him! Hosanna! Hosanna! Let him be proclaimed again a King! a King! a King! Let him value his place upon his throne, high above the kings of the earth. This is what he then did, he proclaimed himself a King. Charles Spurgeon Quotes

Learn, then, that if in Christ's kingdom you would be a peer you must be a disciple; to sit at his feet is the honor which he will give you. Hearing his words, obeying his commands, receiving of his grace — this is true dignity, this is true magnificence. The poorest man that loves Christ, or the humblest woman who is willing to accept him as her teacher, becomes at once one of the nobility that wait upon Christ Jesus. Charles Spurgeon Quotes

Prayers of Thanksgiving:
I praise you, King Jesus!
I humbly bow before you, my Lord!
Blessed be your Name, above all others.
You fill our hearts with your Spirit
Make us your own.
Forever I'll praise you, Jesus!
Amen